Six states accounted for 72 percent of U.S. fuel ethanol production in 2016, according to the most recent estimates from EIA’s State Energy Data System. Iowa, Nebraska, Illinois, Minnesota, Indiana, and South Dakota collectively produced 265 million barrels of fuel ethanol out of the U.S. total of 367 million barrels. All 6 states are among the top 10 U.S. producers of corn, the primary feedstock for ethanol plants, according to the U.S. Department of Agriculture (USDA)

U.S. fuel ethanol production more than doubled from 2006 to 2016. The Energy Policy Act of 2005 created the Renewable Fuel Standard, and by the end of that decade, most motor gasoline sold in the United States was blended with 10% fuel ethanol by volume. In recent years, growth in export markets has contributed to further increases in domestic fuel ethanol production.

Iowa’s 41 ethanol plants have a capacity of more than 102 million barrels of fuel ethanol per year. The state’s capacity is nearly twice that of the next-highest state and represents about 19 percent of total U.S. ethanol production capacity. The state has also received grant money from the USDA’s Biofuel Infrastructure Partnership (BIP) and now has 256 public E85 stations, the third-most in the nation, according to the U.S. Department of Energy’s Alternative Fuels Data Center. E85 is a gasoline-ethanol blend containing 51 percent to 83 percent ethanol.

Nebraska’s 26 ethanol plants have a combined nameplate capacity of more than 50 million barrels per year, the second-highest level in the nation. The plants use more than 700 million bushels of corn per year and annually produce more than 6 million tons of distillers’ grains, which are used to feed cattle.

Illinois, with 13 ethanol plants capable of producing 40 million barrels per year, has the third-highest annual fuel ethanol nameplate capacity in the nation. The state’s farmland, which covers about three-quarters of the state’s total land area, provides most of the corn used as the feedstock for the plants. Illinois has also received grant money from the BIP and has the second-highest number of public E85 stations, at 262.

Minnesota’s 19 ethanol plants have a nameplate capacity of 28 million barrels per year. In 2007, the Minnesota legislature created a four-year grant program that offered incentives to encourage the adoption of E85. By the end of the program in 2011, Minnesota had 78 public E85 stations. The state has since received BIP grant money and now leads the nation with almost 400 public E85 refueling stations, more than one-tenth of the U.S. total.

Indiana and South Dakota each have more than 27 million barrels of annual nameplate capacity, at 14 and 15 plants, respectively. Although it is one of the top national ethanol producers, South Dakota consumes only about 50 million gallons of fuel ethanol per year, making it a major supplier to other states. 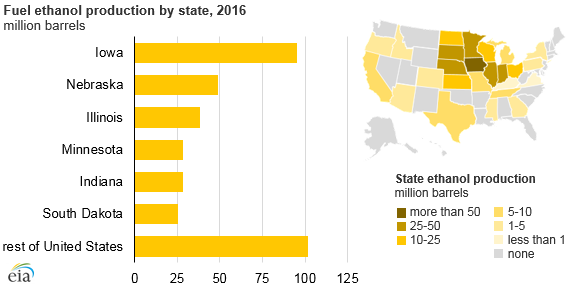