One of the key goals of the Renewable Fuel Standard (RFS) and the Energy Independence and Security Acts in 2005 and 2007 respectively was to reduce greenhouse gas (GHG) emissions from the transportation sector.

GHG emissions from this sector, as defined by the U.S Department of Transport, consists of carbon dioxide (C02), methane (CH4), nitrous oxide (N20) and hydrofluorocarbons (HFC). C02, in particular, accounts for 95 percent of GHG emissions from the transportation sector in America.

In 2012, the Argonne National Laboratory, which is a non-profit research laboratory operated by the University of Chicago for the U.S. Department of Energy, concluded that corn-based ethanol reduced GHG emissions by 29 percent to 57 percent depending on the energy efficiency of the plant or an average of 44 percent. This study can be obtained here.

This analysis was calculated by Argonne National Laboratory using its Greenhouse gases, Regulated Emissions, and Energy Use in Transportation (GREET) model and is based on a wells-to-wheels methodology which, essentially, calculates all GHG emissions from the production process of ethanol to its consumption as a motor fuel. This methodology is also known as a life-cycle analysis.

"MAKING E15 THE NEW REGULAR WOULD REDUCE 358,000 TONS OF CO2 IN MINNESOTA." Source : University of Illinois

In 2015, the University of Illinois at Chicago's principal research economist said making E15 the new regular in Minnesota would reduce 358,000 metric tons of CO2 annually. This, according to the EPA's greenhouse gas equivalencies calculator, is the same as removing 75,368 passenger vehicles from Minnesota's roads for a year.

By comparing E15 to gasoline that contains no ethanol, the CO2 savings would total 1.07 million metric tons which is the equivalent of removing 225,895 vehicles from the road.

Mueller's analysis were based on a life cycle basis which includes emissions incurred during the production of ethanol including fuel feedstock origination (corn growing), feedstock conversion at refineries and combustion in a vehicle. Included were land use change (see below) requirements for feedstock production. Read more of his analysis here.

In recent years, ethanol critics have claimed that the reduced greenhouse gas emissions from ethanol is negated by land use changes (LUC) in the production process. The belief is that LUC to produce biofuel, such as converting cropland pasture to corn, ends up releasing more carbon emissions.

Not surprisingly, LUC claims have stirred up much controversy. But even if the controversial LUC model is incorporated in a wells-to-wheels methodology on GHG emissions from ethanol, the evidence clearly shows that total GHG emissions are still lower than gasoline.

Argonne National Laboratory, in the abovementioned study, concluded that GHG emissions from ethanol, including LUC, is 19 percent to 48 percent (depending on the energy efficiency of the plant) or on average, 34 percent, lower than gasoline.

A common claim by ethanol opponents is that ethanol uses more energy than it produces. This, like many other claims, is completely false. According to a 2016 study by the USDA, ethanol, on average, has a 2:1 energy ratio (ie: it makes twice the amount of energy needed to produce it). In states like Minnesota and Iowa where in some cases ethanol producers use lower corn energy, produce wet distillers grains instead of dried distillers grains and sell ethanol locally, the energy ratio is 4:0.

It is important to note that these energy ratios are takes into account the conventional fossil fuels used for thermal energy and electricity at ethanol plants, energy used to produce corn such as nitrogen and direct energy use for fuel and electricity, farm machinery, the transportation of corn to ethanol plants and the shipment of ethanol to refineries, marketers and traders and the energy used to process distillers grains.

In fact, the study notes that ethanol has a substantial net energy gain and that total energy use per bushel of corn between 1991 and 2010 has decreased 35 percent.

Another popular misconception is that the production of ethanol requires a lot of water. This misconception stems from outdated data. In the last 10 years, technological advancements have significantly reduced water usage for ethanol production.

According to a 2011 study by the Argonne National Laboratory, it takes 2.7 gallons of water for every gallon of ethanol produced. This amount is over 50% lower than the amount needed 10 years earlier. 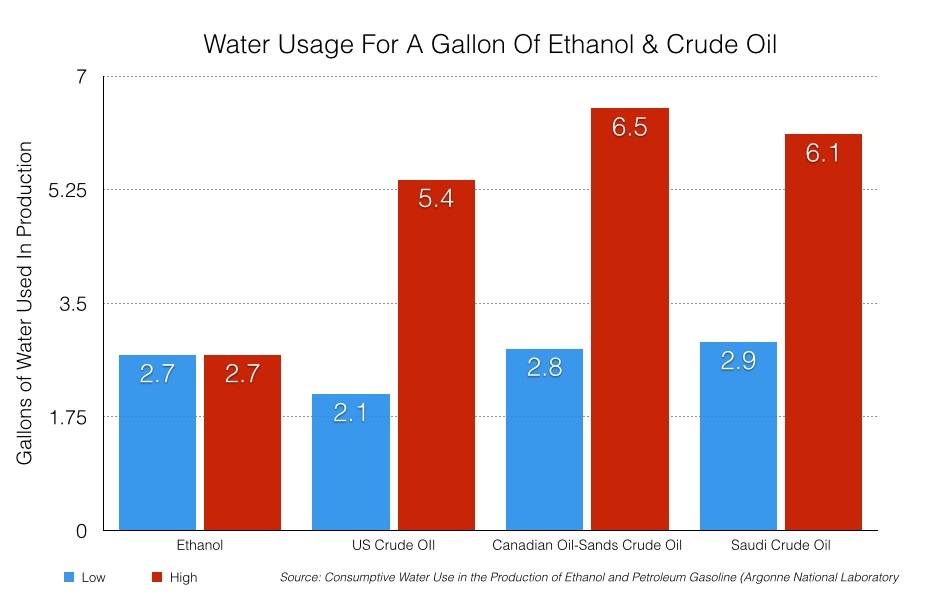 It’s worth noting that ethanol producers are constantly seeking methods in reducing water usage in the production process.

Since 2013, some ethanol producers in Minnesota have been able to produce a gallon of ethanol using under 2 gallons of water. Then there are producers in the state who are incorporating storm water instead of freshwater. This in turn reduces the demand for surface water and ground water.